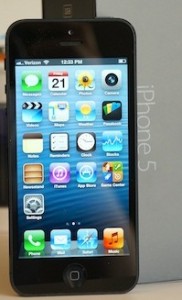 When you’ve bought the latest iPhone from Apple you wouldn’t expect to see your data allowance disappear before your eyes even when you’re connected to Wi-Fi would you? Well, this was happening but now Apple has fixed it.

Owners on the Verizon network had the nasty surprise caused by a bug which meant that, on occasions, their lovely new iPhone 5 would sneakily snaffle cellular data although it was connected to Wi-Fi. Greedy!

The little swines could end up costing its owner extra dollars as this could theoretically rack up expenses on the user’s data plans without them knowing.

The fix is now ready and users are advised to go to the iPhone’s Settings – General menu, where they can update the device to the latest software version.

To see if everything went OK, check Settings – General – About after restart and scroll down to Carrier, where “Verizon 13.1? should be displayed.

Some have said that this now evens things out as there was an earlier report of Verizon iPhone 5s landing unlocked.

Have you had any problems similar to this one on your iPhone 5? Are you regretting updating to iOS 6?