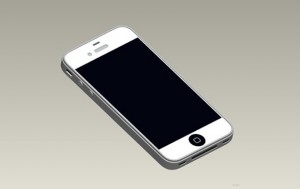 With the release of the iPad 2 happening thoughts turn to the iPhone 5.

It sounds like it will rock the A5 dual core processor but now we get to see other developments.

If this leaked picture is anything to go by it looks as though the iPhone 5 will share a resemblance to iPhone 4 but will be equipped with a larger screen and smaller surrounding bezel.

The images have been published on iDealsChina:

“We just got what appears to be mould engineering drawings for iPhone 5. These would be used by case designers to create plastic, TPU, aluminium, silicone and leather cases. A while back we heard rumours that iPhone 5 would have a curved back, but these images show iPhone 5 with the same form factor as iPhone 4 but with an edge to edge screen.”

The images only show the overall shape of the iPhone 5 but I can’t quite see if there has been any change to the antennae positioning. Rumour is that Apple might sling the troublesome receiver into the Apple logo on the rear of the phone.

The latest development is a patent that shows three possible methods of trimming down the width of the iPhone by altering the headphone socket. Apparently 3.5mm takes up way too much space for Apple.

The first method involves leaving a gap at the top of the device, so that the top part of your headphone plug is left sticking out – that really doesn’t match with Apple’s design ethos now does it?

The second solution employs a flexible dock that would expand and hold the plug in place – I’m digging that.

Then thereâ€™s the hinged door concept which isn’t a million miles away from the first idea but includes sprung flaps to maintain the shape of the device when there’s no jack connected. Can’t help thinking ‘flimsy’ on this one.

After all – the iPhone 5 has to take up the baton of â€œthe thinnest smartphone on the planet.â€ 😉

I reckon that there’s a good chance that we’ll see a white iPhone 5 (Apple has had a year to get its act together after all) and word is that Chinese firm Wintek will be supplying the touch-panel.

If Apple keeps on schedule we should see theÂ  iPhone 5 announced at the WWDC show in June.