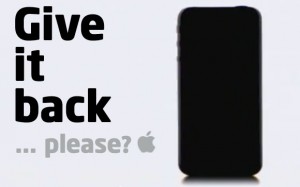 Well, you have probably already heard that Apple has apparently managed to lose another prototype iPhone. Now there is a video plea for its safe return.

Yup, after leaving the pre-release iPhone 4 in a bar last year some (probably now ex) Apple employee has repeated the exercise and left an iPhone 5 in a tequila bar. Doh!

Word is that Apple is ‘assisting’ San Francisco police officers track down the elusive handset.