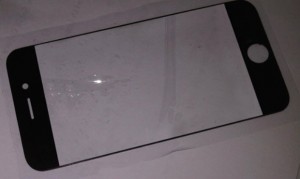 The iPhone 5 looks like it will have a much larger screen than the iPhone 4S according to this leaked picture.

The bezel on display here was spotted on a Chinese part reseller’s website.

You must agree that it does indeed look like an Apple iPhone part and it is definitely flaunting a slimmer bezel which will allow for more screen upfront.

As you can see, there’s no way of checking out the scale of this thing but, according to a worker at Foxconn, the next gen iPhone will be rocking a screen-size of at least 4-inches!

It does match the images previously bounced around the interwebs, but what has happened to the reshaped Home button we heard so much about?

There is still word that the iPhone 5 will look different to the iPhone 4 and iPhone 4S. Annoyingly though, that much rumoured ‘teardrop’ design won’t be used apparently.

Now, a super-sized iPhone would have Apple following the ‘bigger is better’ camp which has the HTC Sensation XL and similar squaring up to each other. It has actually got to the point that the humongous Samsung Galaxy Note is starting to seem reasonable as a mobile phone!

The thing is that if the iPhone does employ a considerably larger screen then that could mean rewriting iOS apps to take advantage of the extra space. It sounds like there’s already some resolution recoding (perhaps for the new iPad 3 Retina display screen) but would that work on taking residence in the new real estate?