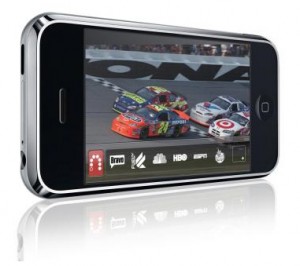 It seems to have been longer than theÂ 6Â months that it actually has been since I got word that Sling MediaÂ was going to bring their SlingPlayer to the iPhone 3G.

But it’s here andÂ has been demo’d at Macworld and the plan is to release the final version to the public in the next three months.

Like SlingPlayer Mobile for Windows Mobile, Palm, Symbian, UIQ, and BlackBerry platforms, this iPhone version will let you access one or more Slingboxes from your mobile device and then you can watch your TV stations on-the-go.

You’ll also be able to manage your PVR from the iPhone as well as adding and removing faveÂ channelsÂ via yourÂ phone.

That’sÂ a first for the SlingPlayer Mobile line of software.

They’ve even utilised the touch screen of the 3Gesus Phone so that swiping the screen horizontally advances you through favourite stations, and flicking up and down rotates through all your home channels.

SlingPlayer should appear in theÂ iTunes AppStore by the end of the March.

Expect it to cost aroundÂ $29.99 which is the going rate for the lifetime fee of SlingPlayer Mobile on other platforms.

If that’s too much just remember OrbLive delivers live TV and media stored on your PC for $10.