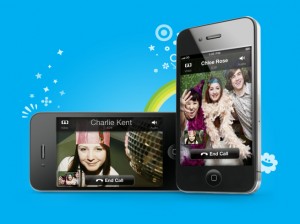 I heard whispers that this may be coming but Skype has handed us iPhone and iPod touch owners a New Years gift!

The Skype present comes in the form of an app that allows users to make free video calls over Wi-Fi and 3G connections – yup, 3G as well!

The new app sticks the boot into Apple’s vid calling as FaceTime needs a Wi-Fi connection. The FaceTime service was launched six months ago with the iPhone 4 and was later incorporated into the new 4th Gen iPod touch.

FaceTime has struggled to get further than it could have thanks to the usual unwillingness of Apple to open it up to more platforms and work out deals with service providers so that vid calls could be made over mobile networks.

So – who else is going to vid-Skype friends and family during a New Years Eve party? Could there be another Skype outage on its way?