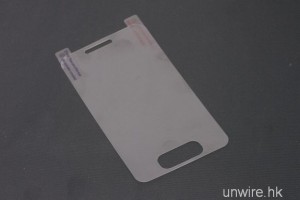 There is now an apparent screen protector for the iPhone 5 that’s doing the rounds and it does mirror a number of early “leaked” case designs that suggested the radical new shape.

Yeah – it’s still back and forth with the two camps as far as the next iPhone release being a mildly refreshed iPhone 4S or an all new singing and dancing iPhone 5. I suppose that deserves a hat-tip to Apple’s tight lipped workers – well, apart from the numpty who left a prototype 4S/5 in a bar 😉

I am sure that everyone, like me, are hoping that the new iPhone will be “radically” different, following the iPad 2 in design with a tapered aluminum back, the larger (maybe 4-inch) edge-to-edge screen and elongated home button/touch pad.

There have been a number of case designs that have appeared over the months and these all seem to follow the redesigned iPhone 5. Joining them is this new screen protector revealed by Unwire.hk.

The dimensions of the protector would suggest that the next iteration of Apple’s handset will be larger in width and height. From a logical standpoint that does actually make some sense as if Apple to hand over the ‘thinnest phone’ crown over to the new guy then the iPhone 5 make grow up and out in order to make room for all the technical gubbins and a decent battery.

But, after all of that, there is probably truth in the fact that all of these cases are designed around the same leaked design document, the authenticity of which has not been verified.

With iOS5 Gold Master going out to manufacturers we’re not going to have to wait long to but these rumours to bed.

No matter how much we hope for iPhone 5 I’m preparing myself for an iPhone 4S to appear early October – how about you?