New iPhone 5 Screen gets Measured and Compared with 4S [video] 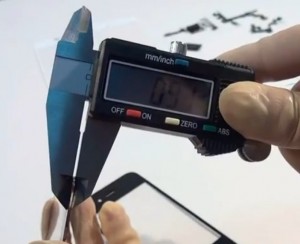 As well as leaked shots of the alleged iPad Mini, a video showing the new iPhone 5’s screen getting all its vital statistics measured has appeared.

The precise measurements of the iPhone 5 display shows that the next generation of the Apple smartphone will be longer and thinner.

Obtained by “reliable sources,” the video shows that the new iPhone’s display is much taller than the iPhone 4S version seen being used as a comparison.

The upcoming iPhone’s screen measures in at 4.065-inches, compared to the 3.61-inch screen found on the iPhone 4S.

The screen also abandons the iPhone’s current aspect ratio, taking it from 3:2 to 16:9 – so we can enjoy widescreen video without the black bars 🙂

Along with being larger, the screen is also 10% thinner than the iPhone 4S, according to this video.

Keeping in line with previous rumors, the forward-facing camera on the phone will be repositioned to right above the earpiece on the phone rather than to the left where it currently lives.

The home button on the phone is also slightly smaller.

The iPhone 5 or “New iPhone” is expected to be announced at the rumored Apple event on September 12 with it being released about a week later, on September 21.

The iPhone 4S was released on Oct. 4, 2011, making a late September or early October release seem pretty likely and in keeping with the Apple release map.

Check out the video below and let me know if this seems like the real deal to you.