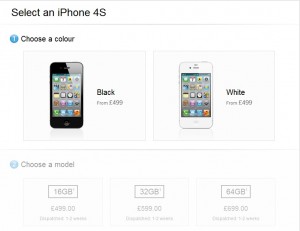 Hello UK! The iPhone 4S is on sale now and so the prices for the 16GB, 32GB and 64GB models have all been confirmed.

Today’s the day to pre-order your new iPhone – whether you do that direct from Apple or via Three, Carphone Warehouse, Phones4U, T-Mobile or Vodafone – all in preparation for the iPhone 4S’ official release date of 14 October.

O2 still has the 4S on its coming soon holding page as does Orange.

Fancy getting the highest capacity iPhone EVER? Well, the brand new 64GB version will set you back £699.

Also for the first time ever in this shape – you will be able to choose between white or black flavours right from release.

As you have already probably heard – The 4S looks identical to the iPhone 4 but it has it all going on under that familiar shell. The main change is the dual-core processor A5 from the iPad 2.

There’s also the 8-megapixel camera and, thanks to it the new brain combined with the shiny iOS 5 software you get your own voice-controlled ‘personal assistant’ called Siri.

It’s just a shame that Apple co-founder Steve Jobs, a mere two days after the 4S was unveiled, passed away less than six weeks after finally stepping down as chief of the company.

The most influential person in technology will be sadly missed.