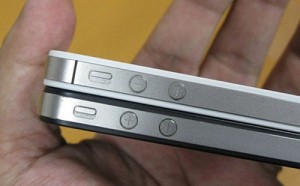 There was a palpable ripple of disappointment when the Apple iPhone 4S was revealed. Even Apple shares dropped 5% because we were faced with an iPhone 4 case – albeit with superior workings. Or so we thought…

It has taken some sneaky skills but some phone Ninjas at Android Sale (yeah, really – I’m guessing the Apple people thought they’d not be a threat) managed to get the iPhone 4 and 4S side-by-side only to reveal that the iPhone 4S does have new hardware!

OK so it’s not the curved glass screen or the contoured back that we were all looking forward to but, if you look carefully you’ll notice that the position of the mute switch and volume controls are slightly different. So – the good news is that there is new Apple hardware (I know that the same change appeared on the US-only CDMA iPhone 4 made for the Verizon network – but that’s in the states ;)).

Still not sure where to go for the best prices for the iPhone 4S? Take a look at my quick guide 🙂