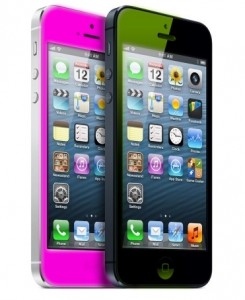 The iPhone. That monochromatic mobile which has found a home in most pockets and handbags. But, there are those that crave more colour and the Nokia Lumia 920 certainly answered – but what if you want to stay with Apple? Before you start thinking about cases or even sending your Apple blower to Colorware, the iPhone 5S could be coming in rainbow hues!

It has been predicted by those in the know that the next generation of iPhone will be available in six or even eight different colours. If this actually happens then it would mark a turning point in the Apple phone’s life – and maybe we’ll see its true colours.

Usually the iPhone’s default colour is black with white being the more novelty shade, I guess.

As well as being more colourful, it’s also presumed that the iPhone 5S will have a better battery (note – better not bigger) and a souped-up high-definition camera and screen.

There’s also a whisper that the next gen iPhone might land a little earlier in the year too. June seems to be the people’s favourite at the moment.

This seems all very probable to me. Let’s face it, Apple recently adopted colour with the new iPod touch, which comes in a range of shades. Could this be a taste of things to come?