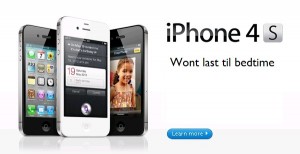 My work buddy was having a moan about the longevity, or rather the lack of, his iPhone 4S battery. I thought it was just the amount of stupid questions he was asking Siri was the cause but now it seems that the iPhone 4S battery life may not be all that great after all.

It appears that Apple has recognised the problem some people are having with the battery fizzing out in the iPhone 4S and have actually started contacting 4S owners to try and find out why this is.

A tad more pro-active than how Apple handled Antenna-gate 😉

An Apple engineer contacted one owner directly to install a monitoring program to try and find out why their handset had much shorter battery life than expected.

Standby time for the iPhone 4S is said to be 200 hours – considerably less when compared to expected 300 managed by the iPhone 4 and 250 for the very first iPhone.

An iPhone 4S owner has stated that they were seeing a 10% drop in standby — every hour!! — A senior Apple engineer phoned the owner and asked about their usage, admitting this was an issue and saying they weren’t close to finding a solution. Helpful huh? The owner then had to email a file to the engineer and is currently awaiting a response.

Granted, the iPhone 4S is packing a more powerful dual-core processor than its predecessors although it his hooked up with the same amount of RAM, and a very similar battery.

Looking at Apple’s support boards there seems to be quite a few people being hampered by this issue. Some users are pointing the finger at corrupted contacts on MobileMe or iCloud, or from Google’s Contacts list; others say backing up the phone on their computer and then restoring gives the battery a boost.

As usual I’d say the first thing to do in order to save your battery is to simply switch off any services you don’t need as well as those that are constantly checking your GPS location as this will be sipping at your phone’s go juice.

How’s your iPhone 4S? Is it making it til the end of the day without a plug? Let me know below 🙂