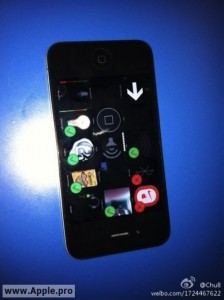 I know how much you all love spy-shots and the likes so here’s what is reportedly being a prototype iPhone 5 handset.

Apple’s delayed next-generation smartphone has been caught on camera and is now doing the rounds on the interwebs – which is about par for the course really.

The handset being touted as the long awaited iPhone 5 is shown wearing an iPhone 4 style jacket and appears to have a thinner screen bezel which, if following the 4S ‘budget’ handset rumours, would be about right.

Before you point and question that homescreen – that, apparently, is the standard Apple test software and not the new and exciting iOS 5 operating system which should get squirted to your iDevice in September.

The new iPhone will be equipped with a 5-megapixel camera along with the iPad 2’s A5 processor.

Amongst the other hear-say is that the new designed iPhone 5 will land with an 8-megapixel snapper on August 16th and not in September as previously thought.