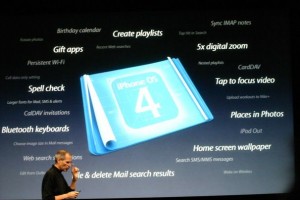 My renowned sense timing meant that I had a gig last night whilst the interweb was aflame with iPhone OS 4.0 news and details.

Now that the dust has settled Iâ€™ve had a chance to see what all the fuss was about.

Was it worth all that hype and anticipation? Well, iPhone 4.0 OS will have more than 100 new user features with seven of those being termed as â€œtentpoleâ€ features.

This magnificent seven are the ones that the rumours happened to have be centred around.

Probably the most anticipated and requested addition to the iPhone OS. Steve Jobs admitted that, in a way, Apple are playing catch-up but with this caveat: â€œwe werenâ€™t first to the party, but weâ€™re gonna be the best.â€

The main stumbling block is that it tends to drain the battery and slooooooow the overall performance of the device. These are the issues that Apple have taken time to address. The way that Apple has managed this was explained by SVP of iPhone Software, Scott Forstall: â€œWe looked at tens of thousands of apps in the app store, and weâ€™ve distilled the services those apps need to run in the background. So we implemented those services, and weâ€™re providing those services as APIs to developers so they can add multitasking while preserving battery life.â€

iPhones will be able to run background audio streaming for the first time; the lack of which has often irked me. 4.0 also brings the GPS-tastic background location. Background location will work with social as well as â€˜turn-by-turnâ€™ apps. In turn-by-turn apps, if you leave the app, it can still continue to track your location by GPS in the background. This will be a heavy drinker of the juice so this will be best used when hooked up to your carâ€™s power point. The likes of Foursquare, Gowalla and Loopt also use GPS and Apple is taking privacy very seriously and is adding in an indicator to the status bar that will let you know if something is tracking your location or not. Youâ€™ll also have the power to decide which applications can use location and which apps canâ€™t.

Another update that popped up on the grapevine is the arrival of the unified inbox. I have five email accounts that I check via my iPhone and for others that are in similar situations this is a great move. Multiple Exchange accounts are supported too. Mail can also be organised by thread and youâ€™ll be able open attachments within Mail and have the file open in an app on the iPhone or iPad. 🙂

Iâ€™ve enjoyed watching the iPhone become a mobile powerhouse for gaming and Apple wants to make it even better. The new Game Center will allow you to invite friends to games right from your phone, as well as ‘match-make’ you with others when you have nobody to play with.
The iPhone Game Center will use achievements, as well as global leaderboards to help you track your high scores with other player by default. Kinda like XBox Live but for your iPhone or iPad.

Iâ€™m not entirely sure if this will be debuting with the release of the new firmware, as Jobsy promised this feature would be coming later this year.

iBooks came to the iPad last week and, with the arrival of iPhone 4.0 OS, itâ€™s coming to the iPhone and iPod touch! This is a clear sign that Apple means business in the eBook arena. Letâ€™s face it, when you consider the amount of iPhones, iPod Touches and now iPads out there itâ€™s easy to see that Apple have the largest potential of any eReading device on the market.

Those of you that have lamented about the lack of any kind of file system layer; rejoice and make merry as Folders will be added to iPhone 4.0 OS. Folders look very similar to Stacks as seen on Mac OS X from10.5. I like the idea of being able to drag and drop apps onto one another to create app folders â€“ This means you can stack all your Social Networking apps together and this also means that you can the amount of apps you can see on your iPhone will jump from 180 to 2160. BOSH!

The iPhone didnâ€™t set out to win the favour of business users, theyâ€™re the folk that voted RIM generally speaking. However, all the executives who wanted to drop the Appley hand-held in their pinstriped pockets have underlined that Apple could do with showing them some love. Jobs and co will be bringing in all those IT workers and developers to the love-in. The first move is building better email encryption. Apple will make the APIs available to developers and allow data to be encrypted inside their applications too. Apple is also stepping up its mobile device management and deployment management tools. iPhone 4.0 OS also adds wireless app distribution for internal apps (think BlackBerryâ€™s BES) and support for SSL VPN.

It hAd to happen eventually I guess. Appleâ€™s now going into mobile advertising. Stevie Jâ€™s reasoning was that â€œusers like free apps, developers like to make some money.â€ Even though Mr Jobs admits that â€œmost [mobile] advertising sucks.â€ Revenue with developers will be split 60/40 (developers getting the 60%). Jobs demoâ€™d how a game could be built into an ad. Iâ€™m still a tad underwhelmed with the thought of ads creeping into apps but I do love free apps so I guess itâ€™s only fair.

This 4.0 software ships in the summer and will treat Phone 3GSâ€™s and iPod Touch 3rd-gen devices with all the sparkly new features. The iPhone 3G and Touch 2G will get “many things,” which doesn’t include multitasking. This means that the iPhone 3G won’t get multitasking â€“ EVER! Boooooooo! Those of you still rocking an iPhone 2Gs will be put in a darkened room behind a locked door it seems.

The thing that everyone was hoping for didnâ€™t happen. No mention of the new hardware but there is 5x Digital Zoom and also hints that it will be packing a flash after some poking around the new software. Three new functions called AVCaptureDevice.hasFlash, AVCaptureDevice.flashMode, and AVCaptureDevice.hasTorch which must point to a new, better equipped camera 😉

iPhone and iPod Touches will be joining the iPad in being able to utilise Bluetooth keyboards.

I think itâ€™s a safe bet that we’ll be seeing some changes come June.

The iPad won’t get the 4.0 upgrade until Autumn-time. That means that iPhone owners (unless they have the 2G or 3G) will be listening to Pandora whilst checking their unified email inbox waaaaaaaay before iPad owners.