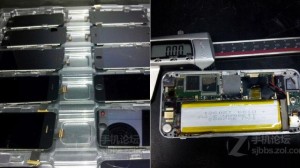 The next iPhone has been leaked in what has been said to be Chinese snapshots of the Foxconn assembly line. Exciting!

The shots, if they are real and people in the know seem quite convinced that they are, confirm what I’ve already thought. It will be an iPhone 5S, even though there’s other names out there for it.

Basically, what we’ll have is a faster, stronger iPhone 5 which will look and feel the same as the latest iPhone.

It’s inside, like the other ‘S’ iterations, that the changes abound.

The Chinese images shows that the internals have been shifted around, indicating the presence of new parts that couldn’t fit where they used to. I’m taking it that there’ll be a faster processor, perhaps more memory, and maybe some other clever things!

9to5Mac has plenty of other shots if you fancy checking them out.

Although – as there’s been an SD card slot spotted… these are more likely to be iPhone clones.