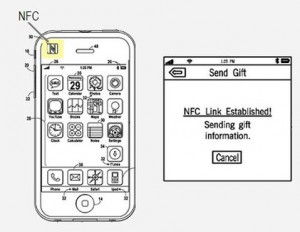 As I’ve been catching up with Apple iPanel/ iTV news I’ve also had a poke around to see if there’s anything about the iPhone 5 loitering around. Lo and behold it looks as though iPhone 5 may well have NFC which is linked to your iTunes account. Could you share a track or video with someone then?

There has been much ado about the Samsung Galaxy S III but, as good as this smartphone will be, everyone is still waiting to see what Apple come out with for their next generation blower.

Just like the Sony Xperia S and the other NXT phones it looks like NFC will be baked in to the iPhone 5 – judging by a patent relating to iTunes gifting.

Gifting, or sharing if you don’t live in the States, seems to be a way of sending an iTunes playlist or movie download to your nearby buddy for them to buy too.

So, no Pirate Bay kind of sharing then.

The HTC One X also packs a NFC chip and that is a blooming good phone but, the thing is, if NFC payments are to take off then Apple needs to get on-board. So, if this goes ahead, we’ll all soon have the option to swipe our mobile for a pretentious coffee.