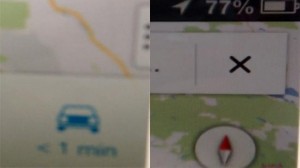 We all know that Eric Schmidt’s statement that Google were not working on an iOS version of Google Maps was to be taken with tonugue firmly in cheek and now screen shots of the new map app have just been leaked.

I knew that slapping on Street View functionality to the browser-based Google Maps for iOS was not all that was happening over at the Big G.

A developer has leaked the first screen shots of what appears to be a native version of Google Maps running on iOS 6 on the iPhone 5 and thus adding to the already hot rumours that Google are actually, really, working on an alternative to the troubled Apple Maps.

Developer Ben Guild posted the images on his blog of Google Maps running on an iPhone 5 and, according to his source, states that the app is a huge improvement over the previous maps app and brings across features previously only available on Android phones.

He adds his bulletpointed statement that:

•It’s vector-based.
•It’s got two-finger rotation to any angle.
•It’s super fast.
•4-inch height of the iPhone 5 is supported!

The app is vector based – this means that it only loads what is required to look great on the page without having to reload the entire map which was a significant weakness of the previous iOS version and cuts down on data usage significantly.

The two-finger map rotation is a great addition so you can keep track of wherever you go on your iPhone and, possibly most importantly, it looks great on the 4-inch iPhone 5 display.

It’s not yet known when Google Maps for iOS 6 will appear or even if it will at all as Google hasn’t yet officially stated they will be releasing an alternative.