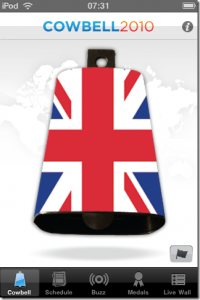 You can’t have winter sports without the backing track of cowbells being whacked as a skier goes flying past.

You try getting a cowbell on a plane in the current security climate and you’re not only going to be looking at getting nudie-scanned but probably getting unpleasantly probed.

Fear not as this inexpensive iPhone app is here to fill that void.

Pick your nation’s flag and shake your iPhone frantically as you no doubt watch Team GB lagging behind in some event-or-other (I’m hoping for a Canadian gold in the Hockey at least).

As well as the cowbell (as if you need anything else), you get a full schedule of Winter Olympic events, a handy Twitter feed of dozens of Olympic athletes, media outlets and bloggers, and a live medal table (you might notice that Kazakhstan is there but no Team GB – very telling).

It only costs Â£0.59 from the App Store and even if you don’t care about the Olympics you get a wicked Cowbell app 😉