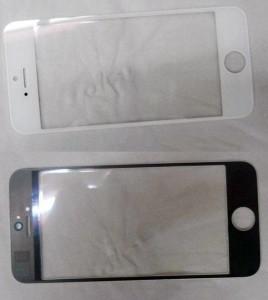 Things are certainly getting fast and furious in the iPhone 5 leaky stream! The latest additions are snaps of the front, rear and bottom of what’s said to be the new iPhone.

First up are clear photographs of the front section of the new iPhone casing.

The space for the familiar home button is still present but the space for the FaceTime video-calling camera has now been shifted to the middle of the phone’s upper section.

The main difference is that the phone has been stretched. The leaked frames reveal that the new phone falls in to being a widescreen 16:9 display when turned sideways. Previous models have had a squarer aspect ratio, so movies have black bars at the top and bottom of the display – the new phone, however, will have their screen filled with cinematic joy.

The new screen is rumoured to measure 4-inches corner-to-corner.

If the leaked fronts are legit, the pic also confirms that there will be a white version of the new iPhone. 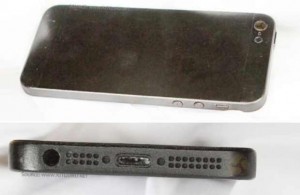 These other photos originally appeared on Kitguru.net but got pulled shortly after – could this prove that they’re snaps of a real test sample, just as the policed Microsoft Xbox document was verified through orders for them to be taken down?

The phone is again shown to be taller than the current model with its 4:3 screen, so it’ll be widescreen when you turn it sideways.

The test sample also has a new-look smaller dock connector in the bottom, which means it won’t work with your existing iPhone dock or any of your charger cables – another opportunity for Apple to make money through convertors 😉

Disturbingly it also shows the headphone connector will be situated down there too – that idea, I don’t really dig to be honest.

Apple is also reportedly working on a smaller version of their tablet, named the iPad mini. The rumoured 8-inch tablet would compete with the Amazon Kindle Fire in the US and the new Google Nexus 7 in the compact tablet market. Amazon is also said to be working on their own phone.