iPhone eBooks and eReaders out Gun Games for First Time 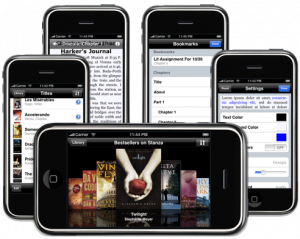 For anyone thinking that reading a book on a small screen is a bad idea and the power of paper should never be overlooked then be prepared to rethink.

Whilst the Kindle, Sony Reader, Cool-er and even Alex are pretty certain of the future; Apple‘s iPhone has stepped in with its own proof.

The obvious advantage with e-Books is portability – I am, at the moment, carrying around with me 15 titles. Which, even in paperback form, would way a considerable amount. Also, these books will not get dog-eared from being shoved in my man-bag!

The smartphone/web browser/gaming machine/iPod has gone and gone and added being a popular eBook reader according to a survey by San Francisco-based analysts Flurry to its achievements.

According to the report, there were more e-books or book-related programs launched on the app store in September than games.

This is the first time this has happened: From August 2008 to August 2009 gaming pwned the app store.

Flurry said that â€œThe sharp rise in e-book activity on the iPhone indicates that Apple is positioned to take market share from the Amazon Kindle as it did from the Nintendo DS [with gaming]. Despite the smaller form factor of the display, we predict that the iPhone will be a significant player in the book category of the media and entertainment space.â€

Personally I’ve just finished Metropolis and am now reading the Sookie Stackhouse novels via Stanza on mine – what are you reading on your iPhone and which reader do you use?