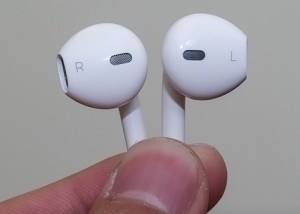 Ask most iPhone users what the greatest disappointment of purchasing an Apple smartphone is and most will tell you it’s the bundled earphones. Well, it looks like they’re getting a redesign along with the iPhone 5.

The freebie Apple earbuds with in-line remote and mic came out in 2008 but the design of the buds themselves harks back to 2006.

It seems that Apple will be releasing an updated iPhone with a totally redesigned connector so, as the associated earphones are no getting on a bit, it stands to reason that the bundled sound-squirters get the same treatment.

Vietnamese site Tinhte, which has a decent enough track record of getting hold of pre-release products, has posted a video of some earphones which look as though they may offer better sound reproduction as well as a funky new design.

Word is that the new earphones are being manufactured at a Vietnamese Foxconn plant, and they bear the legend “Designed by Apple in California. Assembled in Vietnam.” on the cable.

The buds look to me like miniaturised high-end floor-standing speakers and, at first glance, look to follow Apple’s unibody construction process – you can actually see the seams if you look closer.

The earphone speakers seem to be mostly directed down the ear canal for mid and treble with a small vent in the usual earbud direction which will dish out the bass.

I didn’t notice an in-line remote so this may point to full voice control or, more likely, the remote and mic were never in shot.

Real or not – we wont have to wait long to find out and preorder the new iPhone.