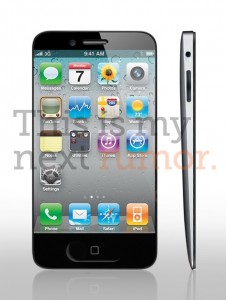 The iPhone 5 rumour-mill is in full effect even though there’s plenty of folk saying that the next gen iPhone wont appear til September.

It is generally assumed that the iPhone will follow the path of 3G-3Gs meaning that there will be some tweakage happening to the iPhone 5’s internals – the exterior will still look iPhone 4. But not everyone agrees…

Now – there’s a fairly new site that I’ve been keeping an eye one that has been set up by Ex-Engadgeteers in partnership with SBNation and they have a rather different idea about what’s going to appear from Apple.

The ‘This is My Next’ team reckon that the iPhone 5 will pack a 3.7-inch display, MacBook Air â€œteardropâ€ styling and the chrome backside first rocked by the iPod Touch.

By all accounts the iPhone 5 is currently in prototype testing – there is word that the new iPhone will feature a new gesture area in place of the hardware home button, there is even a nod to this in iOS 4.3 apparently but that could also point to a ‘smart bezel‘. Other rumours point to the inclusion of an 8MP camera courtesy of Sony.

Personally the body design using styling cues from the iPod Touch and MacBook Air would be kinda neat. Implementing the wedge shape would negate the patents that Apple applied for new headphone sockets – but that’s just taking it that the ports would remain at the top of the iPhone of course.

The new display is 3.7-inches, but keeps the same resolution and will more than likely an edge-to-edge design.

The new size would still keep the pixel count at 300 ppi and so will still be able to be classed as â€œRetinaâ€. This would also be good news for developers as keeping the same resolution means that they would not have to alter their apps again.

Obviously the guessing game as to whether iPhone 5 will include NFC or not still continues.

Would you prefer the flat-backed iPhone 4 design or the more slippy proposed design seen here?