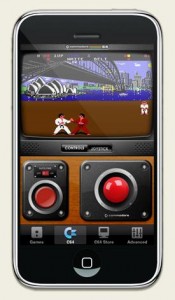 This could have been beautiful!

This totally cool looking C64 emulator was set to bring back my teenage years but no!

Apple has officially rejected another app that at first glance seems harmless, genius and fun.

The Commodore 64 emulator from Manomio offered the coolness of a realistic joystick and keyboard, portrait and landscape gaming, and a fully licensed C64 emulator code.

Apple seemed excited at first apparently but then Manomio got the this mail:

Thank you for submitting C64 1.0 to the App Store. We’ve reviewed C64 1.0 and determined that we cannot post this version of your iPhone application to the App Store because it violates the iPhone SDK Agreement; “3.3.2 An Application may not itself install or launch other executable code by any means, including without limitation through the use of a plug-in architecture, calling other frameworks, other APIs or otherwise. No interpreted code may be downloaded and used in an Application except for code that is interpreted and run by Apple’s Published APIs and built-in interpreter(s).”