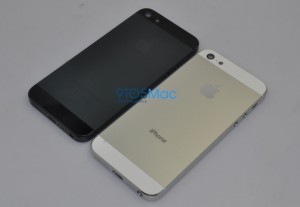 Ooooer! It looks like we have a contender for the first pics of the new iPhone showing off its longer screen and new striped back.

9to5Mac was sent a snap of what was purported to be the iPhone 5’s back plating by gadget repair site iFixyouri, which claimed that this was a new part in its catalogue.

The Apple-loving blog searched around in order to corroborate what the parts dealer was saying and found more pictures which not only backed up the original but showed even more flesh to the rabid hoards waiting to feast on new iPhone news.

Each of these leaks shows the next generation of iPhone sporting a smaller connector port along with what appears to be a newly placed headphone port. Why would Apple put the port at the bottom of the iPhone when it has never done so before? Personally I’d rather it be a mini tripod mount – just think using FaceTime with your iPhone 5 sat in a GorillaPod or similar 😉

The speaker grille has a new look and I notice that there’s a tiny gap between the camera and flash – that could be a repositioned microphone for noise cancellation, a light sensor or perhaps some night vision cleverness.

The frame does indeed look taller than the existing iPhone 4S which may go to support the recent reports that Apple’s next smartphone will be the same width but will have a taller 4-inch display, so that when you spin it on its side you get huge widescreen view.

I like the striped, two-tone effect and I am wondering if the centre section is either aluminium or liquid metal with the current glass covered ends. That would be pretty cool huh?

But, then again, you could add spades of salt with all the above – as usual nothing has been slipped out officially from Cupertino so, who knows?

We haven’t gone long to wait though as the first official news about the new iPhone or iPhone 5 will surely (hopefully) be aired on June 11 at WWDC, when Apple is expected to talk about a new version of iOS, the next version of its mobile operating system, which in turn should mean some phone news!