New iPhone at WWDC? Well, They’re Casting for the iAd 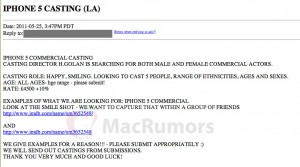 This must be the average Apple fanboy or fangirl’s most specialist dream ever – their chance to appear in a commercial for the iPhone 5 or 4S, whatever.

A casting advert sprang up on Craigslist supposedly posted by director H Golan. It was asking for five “happy, smiling” people from a “range of ethnicities, ages and sexes” in order to shoot an “iPhone 5 commercial,” according to MacRumors.

The ad only stayed up a few hours but when you read a little more closely you’ll notice that the two examples given direct you to the Internet Movie Database page for the same obscure actor.

Also, the adverts use of exclamation marks and smilies is something that I’d expect from me and not a director working on behalf of iSteve!!!! 🙂

Oh – and the rate is given in Â£’s which is a tad odd for an LA casting for an American product.