iPhone and iPod Touch to Get FM Radio – iTunes In 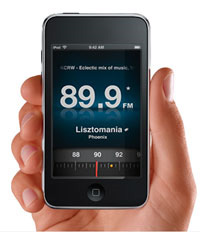 Well; radio may be coming to iPhone’s and iPod Touches if the word on the street is to be believed.

Apple is apparently developing an FM radio app for the pokable handhelds.

They’re already fitted with FM radio chips it’s just that Apple hasn’t switched them on yet.

9to5Mac, which has a reliable track record for being spot-on with leaks, has been tipped with the news.

Apparently the reason it has taken Apple so long to sort this out was because they wanted to build in a feature that lets people buy songs that they hear on the radio.

So – if the iPhone can identify which song was playing, it could let users immediately click to buy and download that song from iTunes.

iPod radio is a fairly recent thing– the latest nanos were the first to get the reception.

Up til now the FM chips have only been used with the Nike + fitness kit and iTrip.

The new nano also lets you pause live radio for up to 15 minutes so I’m guessing that this will be the same for iPhone or iPod touch applications.

Are you excited about this?