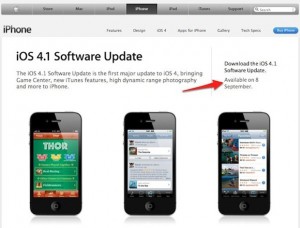 iOS 4.1 which will be the first major update to iOS 4 since the operating system’s release for the iPhone 4, 3GS and 3G, should be out this Wednesday according to word on the street.

Version 4.1 of the operating system coincides with the arrival of the new iPod touch, which will run on iOS 4.1.

People still rocking first-generation iPod touches wont be able to join in with the upgrade – same goes for the first-gen iPhone.

The biggest deal, I reckon, is that this update will bring the Game Center.

Game Center will let iPhone and Touch gamers challenge and play each other; it will also kinda ‘Genius’ other players that have similar skills to you for a fairly matched game. You will be able to share your scores to other players, and find out what games other people are playing.

When the update hits the iPhone 4 it will actually get improved photo and video capture – which I think is already pretty good. This includes the “high-dynamic-range” setting which grabs a bunch of images taken at different exposures and puts them together to offer a better shot. You lot into moving pictures will be empowered to upload 720p, high-definition video to YouTube and MobileMe.

Ping will also appear but, so far, I see little to be excited about. Perhaps having it on the Apple handhelds will change my feeling but, to be honest, I’m not holding out much hope.

We subjects of the United Kingdom won’t be able to rent TV shows straight from their iPhone or iPod touch. Stevie J needs to start chatting nicely with broadcasters around these isles.

OK, so ‘the street’ in this case is gadgety blog Engadget who managed to grab a screenshot of Apple’s UK site which slipped out the September 8 release date of iOS 4.1.

The thing is that’s now been removed.

I wonder if they spotted a small glitch with it, decided to post-pone it or perhaps they gave the wrong date in the first place.

Do you think that Game Center is going to smash the live services from Microsoft Xbox and the Sony PlayStation?