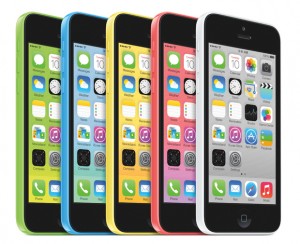 Apple has kicked off UK pre-orders for its colourful iPhone 5 replacement, the new iPhone 5C.

The 5C actually goes on sale a week from today, on September 20th, and you’ll be able to pick one up from an Apple Store at 8am.

Alternatively, you can save yourself from queuing up in the rain by going to pretty much any phone shop.

To get your grubby little mits on one of the rainbow-hued Apple phones you’ll need to ensure that you have £469 if you’re aiming for the 16GB model – while the doubly capacious 32GB version will require £549.

You do get free delivery, and the choice of white, red, yellow, blue and lime green colours.

If you want to trade in your old iPhone for credit, Apple has a recycling programme, but you may still get more if you go via eBay or even somewhere like Computer Exchange, maybe.

Apple’s not doing pre-orders for the iPhone 5S

Nope, there’ll be no putting your name down for the latest flagship iPhone.

Chances are this is due to difficulties in guaranteeing supplies as Apple has to contend with getting enough of the new bits – two new chips, the flash, the camera, and all the fingerprint tech.

You’ll have to wait until the 20th for the new top-of-the-range phone, and head to a high street shop to guarantee getting your hands on one on the day.

The cheapest way to get the 16GB iPhone 5C for free and up front on Vodafone is to pay £42 per month, for two years, which adds up to a whopping £1,008 over the period of the contract.

If you want to pay a more realistic £29 per month, you will have to off-set that by coughing-up £149 up front. That brings the total cost down to £845 over the two years.

Those are just the prices for the 3G option. If you want speedier 4G data then the cheapest monthly tariff is £42 per month – a contract that also demands £19 up front.

To get the iPhone 5C on EE’s 4G service, you’ll be paying at least £10 up front, with the cheapest monthly payment coming in at £46. Still not cheap then?

EE also encompasses T-Mobile and Orange, which are charging similarly high prices for 3G services. £89 up front with £31 per month is a taste of T-Mobile’s offerings, while one option on Orange is £30 up front for the phone, and £37 per month.

Three is recommending £41 per month after paying £49 up front for the iPhone 5C but that does include Three’s generous ‘all you can eat’ data allowance.

If you want to pre-order the iPhone 5C SIM-free from Apple, you’ll be paying at least £469 or add an extra £15 for the Three pay-as-you-go ‘starter pack’.