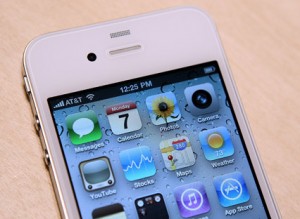 Get your diary out and mark off June 6th – that could well be when the next Apple iPhone gets announced.

This isn’t mere tea-leaf reading and gazing into crystal balls – this is based on some real things.

We all know that Apple traditionally announces their new iPhones at its annual Worldwide Developer Conference – iPhone 3G in 2008, 3GS in 2009 and iPhone 4 in 2010. Fact.

Each previous announcement was on the Monday of WWDC. Fact.

Well, add all that up and sprinkle the fact that there’s been a booking made for 5-9 June 2011 at the Moscone Centre… you see where I’m going yeah?

If this all adds up (I don’t do maths) that would mean that Monday 6 June will be when the big reveal of iPhone 5 or iPhone 4S or iPhone HD…. the latest iPhone anyway will happen.

There has already been hints that the next gen iPhone could sport NFC contactless payment smarts (spotted in an iOS update) and the interweblogosphere is a humming with the possibility of it having a Qualcomm Gobi chip under the hood.

Folks reckon that, as the Verizon version has a Gobi, then so might iPhone 5. The big deal with the Gobi is that it allows devices to be used on different types of network around the world.

The plan would be to make one device that can handle both GSM and CDMA networks, rather than producing different devices for Verizon and AT&T and international networks. So cheaper production costs for Apple but users would get to “choose from multiple carriers worldwide for the best coverage and rates” and “switch wireless carriers at any time through the life of your laptop“. Meaning you could switch to a stronger signal or a cheaper carrier when you feel like it.

The only possible losers could be the networks.

For tablet hunters – If Apple sticks to the annual cycle for other products, iPad 2 should be announced in April.