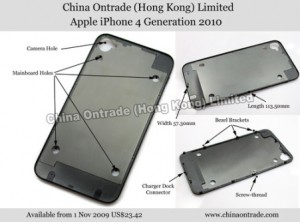 As my contract is almost coming to an end this news is quite interesting – perhaps a tad galling for those who pounced on the iPhone 3Gs though.

China OnTrade lists the “Apple iPhone 4 Generation Midboard” for $23.42, in stock and shipping within 12 business days.

The midboard itself is unremarkable as it doesn’t really give away anything about the phone itself.

Same goes for what is supposed to be the new phone’s SIM tray that’s available for $14.05 starting October 23rd for the 4th generation iPhone / iTabletâ€¦

But there’s more still to come!

“We also have final pictures of iPhone 4 Generation with amazingly beautiful back cover that will come here up soon. Please check for updates,”

Before you say “so what?!” China OnTrade has proven reliable before. In May, the company sold parts that it claimed were spares from a next-generation iPhone and as Gizmodo points out – those parts showed up in teardowns of the iPhone 3GS when it was released in June.

The other bit of news is that Apple seems to be testing iPhone prototypes with built-in RFID readers.

Apple has filed several RFID related patents for an ID app capable of using an RFID sensor, a way to sense and connect to WiFi networks with RFID and a touchscreen RFID tag reader.

So swipe and pay could only be a 4G iPhone away and just imagine all the funky apps that work with RFID tagging – Perhaps it could work with the Nabaztags and Mir:ror and with real world publications to add an extra dimension 🙂

Hopefully it will be less clunky than this effort – no offence 😉