iPhone 4G Could Sport a 16:9 Widescreen Display if This Video is True 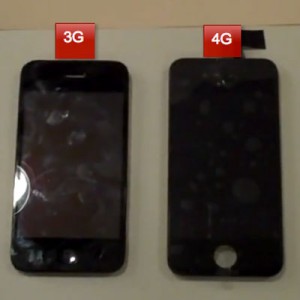 Even though there’s still no official word that says the iPhone 4G, iPhone 4.0 or iPhone HD is happening this video leak could suggest a longer, thinner iPhone and also one that’s pointing to HD movie watching niceness!

The screen of this alleged iPhone 4.0 panel when sat alongside its current cousin does appear to be longer and narrower and if the calculations are correct it looks to be a 16:9 display.

The screen size would mean that next iPhone will be able to play TV shows in their original aspect ratio, and movies with much smaller letter boxing. Much better than the current 3:2 display found on the current iPhone.

The fabulous flick viewing would come at a price though if I’m thinking right. Surely you’d then get less word space in portrait mode than you would get with the contemporary batch.

Have a goosey at the video below and tell me if you’re excited at the prospect of a widescreen iPhone, against the idea of fewer words per line or really couldn’t care less because iPhone 4.0 is gonna rock no matter what the size of the screen!