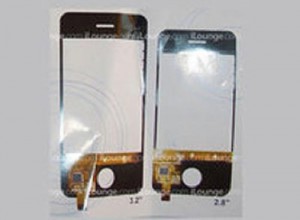 Now, you may have figured out that I like a decent rumour served with a hefty slice of gossip.

According to iPhone repair site, iResQ, the next generation of iPhone is going to be super-sized and not Nanoed.

iResQ has posted photos of what it says is the case for the iPhone 4G and, as you can see, it’s a quarter inch taller than the current 3GS.

If the pictures prove genuine this would mean that the hardware may well be different in other ways; that’s as well as it being the first time that Apple has moved from the standard iPhone template since we first gawped at the original in 2007. Obviously it’ll have a larger screen so maybe iBooks could come across to the iPhone – but could this make the iPad even more pointless?

The curiosity of the new front panel has to be that mirrored surface above the earpiece slot. iResQ suggest it may be a proxmity sensor but why would the mirrored surface need to be visible on the front of the device?

The repair site does underline the fact that this might not be the final version of the iPhone 4GS case – Hmmmmmmmmmmmmmmmk. Pass the salt 😉