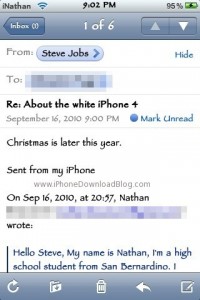 Still getting the reply ‘later this year’ when asking when to expect the white Apple iPhone 4? Well, so was Nathan so he pinged of an email to Steve.

I’ve just been pointed in the direction of MobilesDNA that have an unconfirmed email conversation between Nathan (self-confessed Apple Fanboy) and Steve ‘black polo neck sweater’ Jobs.

High school student Nathan politely enquired when he can get his mits on the albino Apple:

“Hello Steve, My name is Nathan, Iâ€™m a high school student from San Bernardino. I also happen to be one of your biggest fan and a total Apple fanboy and proud to be Iâ€™ve been saving up money to buy the new iphone 4. I want the white one but Apple said it wonâ€™t be available until later this year. I know you must be asked this question hundreds of times a day but do you think we can expect to get the white iphone for xmas? I hope you can answer. Thank you Steve.”

Stating the obvious or is this the white Christmas that fanboys and girls have been waiting for?