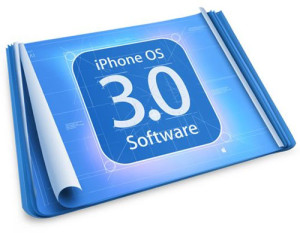 So what does this bring?

Well, let’s get those poor developers out of the way first.

They’re working away to enrich our lives and make a few quid but now we can buy additional levels or elements to games and other apps and those poor developers will get 70% of the charge right in their pockets.

Apple have followed the lead of the Nintendo DSi’s so now iPhone and iPod Touch (the 3.0 update will cost Touch owners 10 bucks by the way) users will be able to play against each other via Bluetooth. Users will form an IP connection, and can compete against each other in whichever app they share.Â  Sweet 🙂

Maps get a once over as well.

Apple and Google have done well so far to bring Google Maps on the iPhone but now Apple will let developers use the Maps to their advantage.

This means more location-based applications (and probably adverts) coming soon. They’ve also given permission to developers to use the GPS for “turn by turn directions” – bye bye seperate sat-nav!

Users simply have to double tap on the chosen text they wish to copy. Once selected a cut and paste box pops up with various options.

Better still – It works across all applications, and even copies HTML too!

In a swish move – to undo the cut and paste, simply shake the iPhone.

Can it get any better?

how about Apple mentioning an update to attaching photos to emails – you can add more than one.Â  You spoil us Apple, you really do!