iPhone 2.1 To Be Released in June According to Arabs 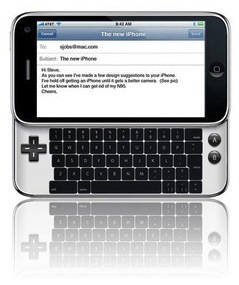 There has been plenty of speculation regarding the up-and-coming iPhone 2.1.

But as the iPhone 3G is apparentlyÂ going to be arriving to Etisalat, theÂ mobile provider in the United Arab Emirates, word has it that they are hinting at a June release for the next version of the iPhone:

The current 3G model will become available on February 15 according to Dow Jones, and Etisalat will be targeting private and business users.

And the next version of the device, which is due out in June, will be launched in the UAE at the same time.

Although the piece doesn’t actually quote Mark Davis, Programme Director for iPhone at Etisalat,Â regarding theÂ June release, it does appear that this little tid-bitÂ may have been dropped by Davis himself as it features in an interview give by Mr Davis.

This is quite an exciting bit of information as thisÂ is the first time thatÂ there has been anything even representing a release date.

I’ll be keeping you postedÂ as always :)Â