iPad Statistics Confusing – Didn’t Apple Design This to be Portable? 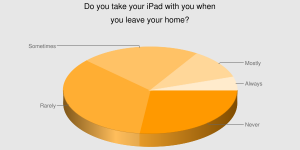 Oh how I laughed when I read that the iPad would just confuse us Brits when it was released.

Really? How stupid do they think the UK tech-heads are?

Well, it does appear that this glorious nation hasn’t really got the whole idea of what Apple’s tablet is about. This is according to a survey conducted among 1034 UK Apple iPad owners by Cooper Murphy Webb…..

The results show that a mind-boggling 27% of UK iPad owners ‘never’ take the tablet outside the home – So, wouldn’t a MacBook or any other net/laptop do the job then?

Too add to that confusion; a mere 35% of these trendsters ‘rarely’ take the tablet walkies.

All-in-all this means that over half of the UK iPad owners that were surveyed (62% to be precise) only use their portable media player/internet browser within the confines of their home base.

Perhaps they haven’t read that Apple had put all the iPad’s tech in a package “thatâ€™s thin and light enough to take anywhere”. Maybe they thought anywhere was to the garden, upstairs and then back to the living room.

It does seem that these housebound gadgets are being used for reading with 31% of Apple iPad owners opting to read magazines and newspapers on the fruity tablet. After the iPad came laptops/computers at 26%. Only 24% preferred reading their mags and papers in the old skool print versions.

41% of the surveyed owners prefer reading books on the iPad than any other device.

It seems that gaming consoles were also beaten by the iPad (really?) for the choicest gaming device. The iPad claimed 37% where consoles only grabbed 35%. PC gaming only managed 22% of the score.

The iPad didn’t have its own way totally though. When it comes to browsing the interwebs 38% iPad owners said they would surf on their tablet whereas 55% still love the experience given by their puter 🙂

What do you fit in?

Would you rather Xbox, PS3, Wii, PC or iPad for your gaming?