New iPad Released on Friday from £99 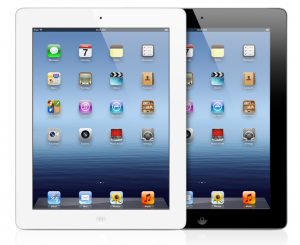 The new 3rd Generation iPad arrives this Friday, March 16th, and Three has released its pricing which starts as low as £99 for the new Apple slate.

Queues have already started forming outside Apple Stores around the country but now Three has revealed how you can get a new iPad for as little as £99 up front.

All of the contracts have 15GB monthly allowances.

If Everything Everywhere’s plans go ahead you might actually get some use out of the 4G element of the new iPad. Don’t worry though, as it will run sweetly on Three’s upgraded 42Mbps 3G standard when it goes live – until then it’ll play nice on the usual 21Mbps waves.