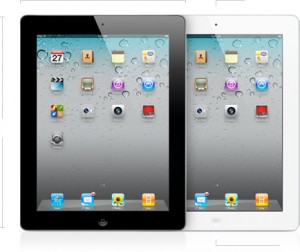 Was it worth the “song and dance“?

With Steve Jobs walking on stage declaring “We’ve been working on this project for a while, and I just didn’t want to miss this” the iPad 2 was announced.

The event was as buzzy as usual and as soon as everyone was told to switch off their phones one thing was on the crowds mind. iPad 2 – what will the changes be?

It’ll be available in black and white from the start as well as playing nice with AT&T and Verizon from day one!

The iPad 2 also comes with HDMI mirrored video output which can be squirted onto your big telly via the $39 HDMI cable.

Display
9.7-inch LED with a 1024×768 pixel res with that anti-fingerprint coating – no Retina Display this time.

Smart Case
“The Smart Cover and iPad 2 were made for each other. Literally. Built-in magnets draw the Smart Cover to iPad for a perfect fit that not only protects, but also wakes up, stands up, and brightens up your iPad. Thatâ€™s not just smart. Itâ€™s genius.” $39 for polyurethane and $69 for leather.

The iPad 2 will be available in the US on March 11th and the UK, Canada, Europe and a load of other places on March 25th.

The prices are as the original iPad – starting at $499.

The iPad site on the Apple store has been refreshed so have a looksee here.