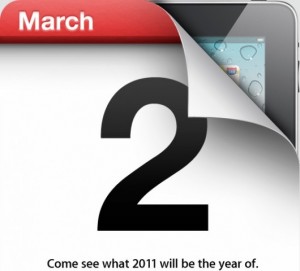 As the interwebs are heating up ahead of todayâ€™s iPad 2 launch event news that all the hype may fall flat has come direct from Apple.

Everyone is hoping that Steve Jobs might make an appearance even though he is still battling against his illness but, according to an Apple staff member iPad 2 isn’t worth the excitement:


â€œFor the iPad 2 donâ€™t get your hopes up too high. Thatâ€™s all Iâ€™m going to say,â€ the unnamed insider went on to say: â€œTheyâ€™ve had a number of problems along the way, and the third-generation iPad is the one to make a song and a dance about.â€


By all accounts iPad 3 will be released later this year and that’s the one that’ll wow everyone. Todayâ€™s event will focus on an update to MobileMe. Rumour has it that Appleâ€™s cloud-based offering will become a digital locker for movies and videos bought from iTunes.

The iPad refresh to the 2nd generation tablet will include a better speaker, new cameras and a thinner, lighter design.

So – are you holding out for an iPad 3 now or will a camera equipped iPad 2 do the job?