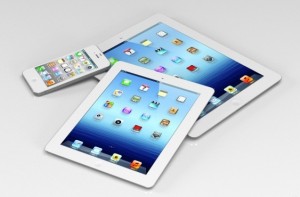 Here we go again! The rumour-mongers have been at it again with their tales of an iPad mini just because Google and Asus have cobbled together a very decent package with their Nexus 7. Is there any more facts to bolster this latest claim?

Even though the Nexus 7 isn’t actually aimed at challenging the iPad directly, it’s more likely to taunt the Kindle Fire really, the mix of a well put together Android Jelly Bean tablet and a very low retail price may get Apple a little nervy.

Today’s iPad Mini rumours are sourced in China, where Apple’s supply and manufacturing partners are. This particular whisper is that an iPad mini equipped with a 7.85-inch display using Sharp’s IGZO technology will land in the Autumn.

Perhaps Cupertino has seen the writing on the wall that has been sprayed in huge letters by Google – cheap Android tablets don’t have to be nasty!

Granted, the iPad and Nexus 7 are completely different beasts but, to the punter looking for a tablet which can surf the web, gain access to social networks, play funny cat vids from YouTube, etc the keen pricing of the Google tab will certainly play a part.

I’m still not convinced that there is a point to a smaller iPad – surely the iPhone *is* a mini iPad?