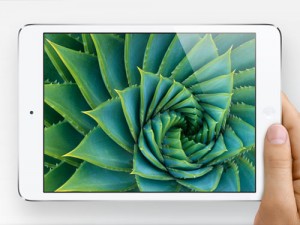 Tim Cook was waving one around on stage in San Jose and Sir Johnny Ive called it a “concentrated” iPad – but what are the specs and, more importantly, the prices?

The iPad Mini has a 7.9-inch screen with a resolution of 1024×768. Not Retina Display territory but, apparently, that extra 0.9-inches is very important. I think that was a dig at the Nexus 7.

Build-wise, the iPad Mini is 7.2mm thin with an aluminium curved back and the same finish as the iPhone 5.

Inside there’s a dual-core A5 chip pushing things along, a FaceTime HD camera on front and a 5MP iSight camera round the back.

You also get Wi-Fi and the Lightning connector instead of the old 30 pin old skool fitting.

The iPad Mini is available to pre-order on October 26th with a release date of November 2nd.