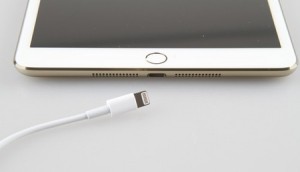 I was wondering when this would happen. It looks as though the iPad mini will be next in line to get the fingerprint scanning tech of the iPhone 5S.

If the leaked snaps that have appeared on DoNews are to be believed we can expect Apple’s iPad mini to be soon rocking TouchID.

The photos purportedly show the next iPad mini, complete in the latest champagne-hued gold paint job first seen on the new iPhone 5S. As well as the bling paint-job it is also sporting the fingerprint-reading home button.

The first iPad mini went on sale last November, so we’re coming up to the time a second generation of the 7.9-inch tablet could put in an appearance. As well as the clever homebutton tech, most people looking to upgrade to the new mini will be hoping for the Retina Display to also be present.

Remember though, TouchID is not foolproof as it has already been cracked using fake prints as well as cat paws (see below) and other body parts. Don’t ask.