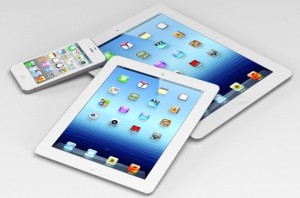 There could be an end to all the rumours surrounding the Apple iPad mini as word is that it could be revealed in just over a fortnight!

That’s right – we could well be eyeballing the new little Apple tablet in the next few weeks with it going on sale as soon as the end of the month.

Fortune says it has chatted with a major Apple investor, who, while asking to remain anonymous, believes from ‘multiple sources’ that invites to an iPad mini launch event will be sent out on October 10th – that’s a week tomorrow by-the-way (which sounds even better).

With Apple’s appetite for dramatics, they don’t usually send out invites to events more than a day or so before the do. If they follow that and the whispers are true then the unveiling could be either side of that weekend.

If Apple gave the press a weeks notice for the iPad mini even then that would make October 17th the party date. Following how the iPhone 5 was announced on a Wednesday and went on sale the following Friday, and as the new iPad before it, then it would stand to reason that the iPad mini would launch on October 26th.

This fits really well with a report from Barlcays Plc which mentions that the shrunken iPad will hit the stores before Christmas.

Even though things are pointing in the same direction, this is all still mainly rumour, hearsay and guesswork with a sprinkling of hopefulness.

As well as when it will arrive, what it will look like and perform like are also contentious issues. Will it be a large iPhone or a smaller iPad? Will it follow the iPhone 5’s widescreen looks or retain the new iPad’s screen ratio?

What is known is that there are many decent smaller and, perhaps more importantly, cheaper tablets arriving from major manufacturers landing in the stores right now.

Google’s got the quad-core Nexus 7, there’s the very capable Acer Iconia Tab A110, Amazon is launching the Kindle Fire HD, and US bookseller Barnes and Noble is getting ready to bring its Nook HD tablet to the UK too.

Apple isn’t known for following the crowd but if these sub-£200 tablets are eating in to the iPad pie then it can’t really afford to just stand and watch.

Would you buy an iPad mini or one of the Google-based tablets?