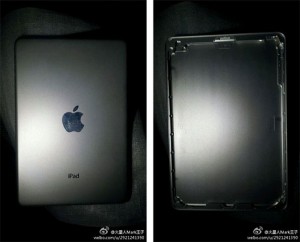 The news that Apple may release an 7-inch screened iPad Mini along with the iPhone 5 probably hasn’t escaped you. You’ve probably seen the engineering prototypes, but now here’s the actual casing for Apple’s latest tablet. Allegedly.


These “authentic” Apple iPad parts have made an appearance on the interwebs via Chinese social media site Sina Weibo.

I’m not too convinced, to be honest.

Would Apple release a new iPad without a rear-facing camera?

How about the planned mini-dock connector?

Then again, if these were early parts, a camera hole could always be something that is added later.