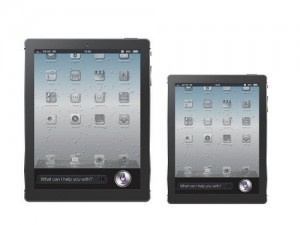 The iPad 3 is due to launch next week but, as well as the next generation of Apple’s tablet is unmasked it sounds as though there may be another big, or smaller, reveal later in the year.

Word on the web is that Apple may finally decide to out an iPad mini.

The 7.85-inch iPad may break cover in the autumn according to rumours attributed to a supply chain source – but, let’s face it, we’ve heard this all before.

The reason why this has suddenly become newsworthy once more is that, for the first time, there’s a price tag attached to the iPad mini. The numbers being bandied about are $249 (£156).

There were whispers back in October that a 7.85-inch iPad, equipped with the iPad 2’s 1024×768-pixel screen, was in the offing. The beauty of keeping the iPad 2’s screen resolution would mean that all the apps out there will work without having to be modified.

I would think that, should such a beast appear, the iPad mini would be gunning for the Amazon Kindle Fire.

If you want to keep full-size and some money in your pocket at the same time then news regarding a cheaper iPad 2 should excite your tab-buds.

As well as the 16GB and 32GB iPad 3 Apple is also expected to unveil an 8GB iPad 2 which will cover the more wallet-friendly area of the tablet market.

This would fit with what Apple has done with the iPhone in the past. The iPhone 3GS and an 8GB iPhone 4 are still available to buy new from Apple at discounted prices so having a similar model for their iPad would make sense. Well, it does to me.

Could all of this multi-tiered tablet talk explain the possibility of Apple fitting both the refreshed dual-core A5 and quad-cored A6 processors to their gadgets?

Brace yourself for Apple grabbing more of the tablet market share should they release the 8GB iPad 2 at around the £200 mark!

There is talk that Apple may well also launch an updated Apple TV at the event next Wednesday.

Here’s all the iPad 3 rumours in one place 🙂