iPad gets Assistive Touch in iOS 5 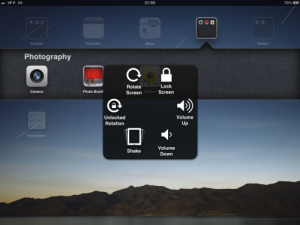 iOS 5 is almost on the horizon and it seems that the iPad is getting some new skills.

As you will probably be already aware, September will see Apple’s latest operating system getting squirted out across its iPhones, iPads and iPods.

Those lucky developers who have already been playing with the beta version of the next-gen os have noted that iOS 5 hands the iPad ‘Assistive Touch‘.

The new system activates one tap access in order to provide additional interactivity for those who might have trouble using the traditional gestures and buttons on the iPad.

A menu can be brought up by pressing on one corner (similar to the live corners on Xperia Mini‘s corner short-cuts I guess) then the user will be able to swipe through screens, lock the rotation tool, use pinch-to-zoom and control the volume.

This will obviously be of benefit to a lot of people but there’s another 3 corners on the iPad – could these be opened up for more shortcuts to media menus and such like?