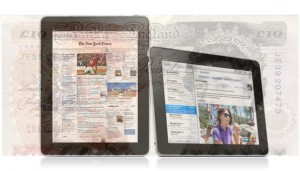 Could this be a non-starter here in Brit land?

Well, according to Simpson Carpenter the initial sales of the iPad are said to be disappointing. Before you point out the huge demand and stock shortages – apparently that’s down to “An impulsive minority will simply have to have it. For them, it’s not about function, compatibility or improvement but about raw appeal, its sheer magic.”

The market research company took to the streets to ask the British public what it thinks of the tablet, and, more importantly, whether or not they’d buy one.

Let’s get this out of the way first – Brits think that the iPad is “cool” – which I think most of us will agree.

The thing is; most on this island also think that it’s a tad expensive and “occupies too much territory already covered by smartphones, PCs, laptops and traditional media”.

Mike Stevens, Director of Telecoms Media and Technology at Simpson Carpenter thinks we might be confused: “When the iPhone was launched, it revolutionised an existing category that people understood,” he goes on to say “The iPad is at the vanguard of a new category that sits between the computer and the phone – so it’s not surprising that many consumers struggle to see how it could fit in their lives.”

Personally I kinda get his point as I’m waiting for the iPhone 4 and, as it seems to be kitted out with an iPad processor and will fit in my pocket, will probably find it more useful 🙂

Where do you stand?