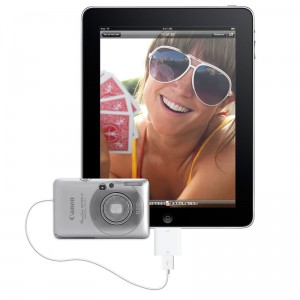 Apple is after your money again folks!

Apple proudly announced iPad Camera Connection Kit at its ‘Latest Creation’ event back in January but that was the last heard about it.

There has been all sorts of other additions released since but over the last few days the $29 adapter bundle finally has found its way onto the website showing a “late April” ship date and ready for preorder.

The pack includes a pair of dongles to support USB and SD cards.

Now for the latest in tech you would have a good case in demanding that the iPad should already feature such support for both of these. Let’s face it; USB and SD cards aren’t exactly exotic formats are they?

Personally I put this all down to Apple’s money making schemes – could I be wrong?