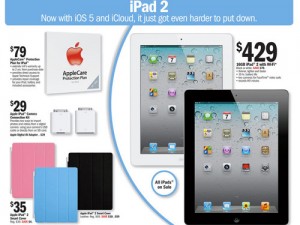 There is already strong evidence pointing to the imminent release of iPad 3 but now a number of US retailers have slashed the price of the current iPad 2 device – what more proof do you need?

I showed you innards and backplate of what was reported to be Apple’s next gen slate as well as naming a date, and now the iPad 2 has been the target for severe price cuts – it can only mean one thing.

iPad 3 is tipped to be heading to stores in early March so a number of US stores have started to clear their current stock of iPad 2s ready for the new model.

Slashing $70 (£44) from the price of the 16GB Wi-Fi Apple iPad 2, American retail chain Meijer has offered up one of the largest iPad 2 discounts since the device launched last March – you’d better be quick as the offer stands only “while supplies last.”

As well as the Retina Display and quad-core processor what other rumours in my round-up are you wishing come true for the iPad 3? Let me know below 🙂