iPad 3 to Arrive in September as iPad 2+ : Season of the Plus 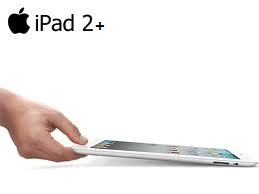 Will the new iPhone be the 5 or 4S or 4+? Well, it seems that the latest trend is to whack Plus at the end (Google+) as, according to the latest word, Apple is to launch an updated version of the iPad 2 later this year which may be named Apple iPad 2 Plus.

This might annoy those holding out for an iPad 3 but at least you that grabbed an iPad 2 only a few months ago can breathe a sigh of relief.

Apple is reportedly planning to unveil a improved iPad 2 Plus device later this year to coincide with the release of the Apple iPhone 5 and iOS 5 operating system.

“There are some indications from the supply chain that Apple may look to introduce an ‘iPad 2 Plus’ device as they put out request for quotes from various component suppliers for this marginally different device,” FBR Capital Markets analyst Craig Berger announced.

The ‘marginal’ differences are likely to include tweaking the screen. The iPad 2’s 132 ppi display is believed to be getting a 250 – 300 ppi upgrade for the 2+. It is almost a given that next iPad iteration will feature increased storage.

I would still be treating this news as rumour as Berger himself states: “While we find this new commentary interesting, we await more confirming data points from other supply chain contacts before fully believing a new iPad device is coming in 2011.”

What do you think the likelihood is of us seeing an iPad 2+ in autumn this year?